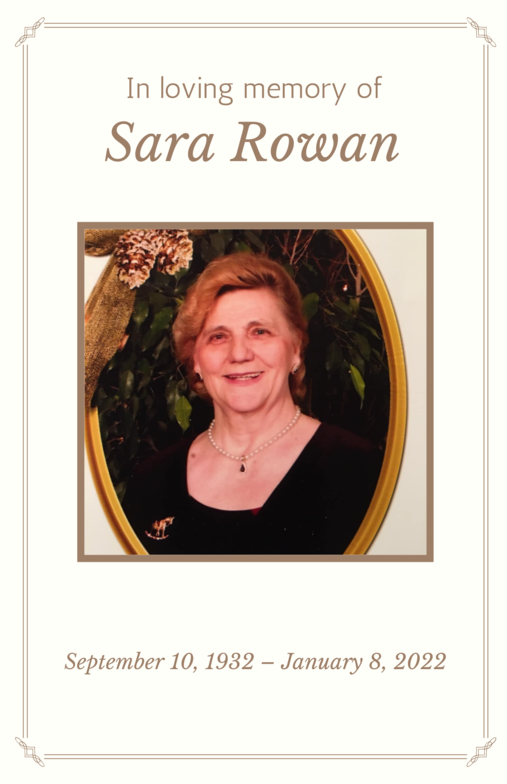 Written By Her Nephew Charles

Sara Krivenko Rowan was born on September 10, 1932. She was born on an island in Tigre in the Buenos Aires Province. Her parents were Don Constantino Krivenko and Doña Eva Bowtovich. She had 2 sisters, Lidia and Nina, and a brother, Pedro. She was raised in a Christian home. In her teens she accepted Jesus as her Lord and Savior, and she also participated a lot in the church activities where she was a member. In her youth she delivered herself to the Free Brothers Church’s, in the town of Flores, Buenos Aires.

Her parents were from Ukraine. They came escaping from World War I, arriving in Argentina in 1925 while searching for a better place.

In her youth Sara worked on the Justice Tribunals in Buenos Aires with her sister Lidia. Searching for new horizons and a better future she emigrated to the United States of America in 1964. She went with the idea of coming back someday, but it turned out to be her place in the world, so she became a citizen of the USA.

There she met a man named Daniel Rowan, who became her husband in 1964 in Boston. Sara didn’t have any children, but she had nephews and great nieces. Her sister Nina had a child Miriam; she was her first niece who passed away. Miriam had 3 children, including Maria and Cristina. Marta and Ezequiel are her great nieces. Then her sister Lidia had a child, Carlos. He lives with his wife, Liliana, and her daughters Ludmila and Jazmin, who also are Sara’s great nieces.

In 1986, Sara’s husband, Daniel, passed away. Since that moment she lived alone, but was always accompanied by her Lord and all her beautiful friends at her church in Stamford. Also, she had so many friends here in Argentina who loved her and always were pleased to see her whenever she came to visit.

This is a little summary to know Sara Rowan, the eternal woman.

And last but not least, we want her to be remembered as the beautiful soul she had and how loved was she in everywhere she went. Sara was the best person you could ever meet, so all of us present here need to feel fortunate to had known such an amazing human being. She's still here in our hearts and will always be.

A service in Sara's honor will be held Saturday, January 15th at 10am at Evangelical Community Church (1155 Newfield Ave, Stamford, CT 06905).

Subscribe to receive email updates with the latest news.